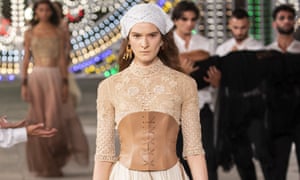 In the latest sign of fashion’s determination to return to normality, Dior staged the first cruise show of the coronavirus era on Wednesday night, in Puglia, Italy.

It was almost business as usual as models walked, 2 metres apart, through the grounds of Lecce’s cathedral. The shimmering set, by artist Marinella Senatore, was inspired by the local luminarie tradition, with neon motivational phrases, such as “We rise by lifting others” embedded within twinkling coloured lights. The clothes were definitely not the kind most of us have been wearing in lockdown: caramel leather corsets and long, flowing skirts. It was difficult not to see a touch of Florence Nightingale in the models’ white headscarves.

Notably absent, however, were the hundreds of buyers and press who usually attend such events, most of whom instead watched from home, on their computers.

Cruise – or resort wear – shows have become a hot-button issue in the fashion industry. Traditionally, they involve hundreds of guests being flown to spectacular locations, and take place in addition to the usual spring/summer autumn/winter fashion calendar. Some brands, Armani and Gucci among them, have announced plans to use the enforced pause of Covid to slow down and return to a model of twice-a-year shows, for reasons of both sustainability and creativity. 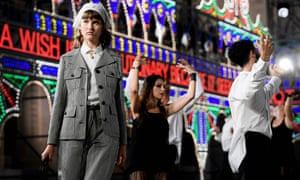 A model presents a creation for Dior in Lecce. Photograph: Filippo Monteforte/AFP/Getty Images

Dior’s creative director, Maria Grazia Chiuri, was keen to make the economic case, in a video interview, for reorganising the show, which had originally been planned for May. “So many people depend on our work. It’s a collective project that involves many people and I found a great sense of sisterhood and brotherhood among these people,” she said. She added that Puglia was “my father’s homeland” and the collection promoted its crafts and traditions, with local dancers performing the pizzica folk dance around models, and fabrics from a local weaving studio used to recreate the famous Dior Bar jacket.

Pietro Beccari, Dior’s chairman and CEO, added that going ahead with the show was “not an easy decision” but evoked the spirit of the house’s founder, Christian Dior, who famously created the New Look, just after the second world war. “There is huge emotion tonight because everyone gave the last drop of energy in a difficult situation, here in Puglia and all over France and Italy, to help us pull together the collection,” he said.