How we kept fit came under the spotlight more than 50 years ago in the Observer, but sadly, all the cigs and booze were never going to help 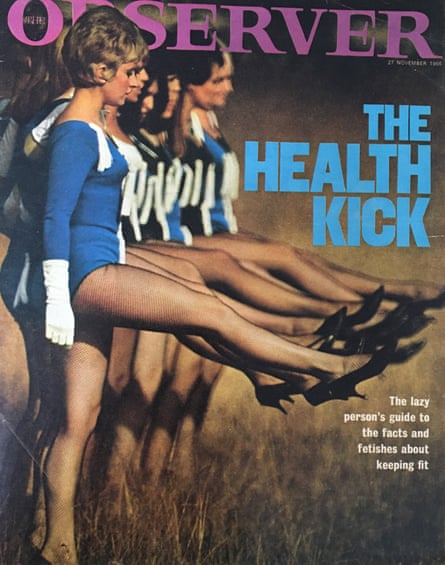 The Observer Magazine of 27 November 1966 took a look at ‘the winter problem of keeping fit’. But going by the introduction, they were up against more than just the time of year, describing ‘the tiresome truth that keeping in shape means taking enough exercise and not eating too much food’. Their writers were dispatched in search of ‘the easy, lazy ways to achieve both ends’.

There was a rather bizarre picture of journalist Brenda Marsh tenpin bowling with an ‘Imp’ – a gas mask connected to a backpack via a tube. The Imp measured how many calories she expended during various activities, also including ‘bed-making’ and ‘tidying house’. Her co-subject, Michael, had neither of these categories.

There was also a recommendation for the ‘unobtrusive’ system the US Marines used. ‘Those top executives surreptitiously pushing their fingers against the underside of their desks are doing isometrics.’ Or burning calories some other way.

John Heilpern’s visit to a ‘luxurious health hydro’ had an alarming start. The osteopath, giving him a ‘neuromuscular massage’, exclaimed: ‘Wait a minute, I can’t find your spine!’ His prescription was three days of hot water and lemon (and occasionally mint tea). ‘You’re mad!’ replied Heilpern. ‘I’ll never last. I’ll die!’ Given his lack of backbone, would he manage?

Heilpern comments later: ‘For the first time in my life I was living in the lap of luxury – and I was starving hungry’. The upside was that he did lose a stone in 10 days. One Tory MP told him that he couldn’t stand the deprivation any more and had snuck out when it was dark for… a Mars bar and some Jelly Babies.

Of course, all of this advice was nestled in among the usual adverts for Consulate cigarettes (‘cool as a mountain stream’) and Johnnie Walker whisky. Well, you’ve got to relax after all that effort.