New Zealand scientists say they have invented a warning system to predict volcanic eruptions that may prevent future tragedies such as the blast that killed 21 people on White Island/Whakaari in 2019.

“Had our system been in place (on Whakaari last year), it would have raised the alert 16 hours before the volcano’s deadly eruption,” they said.

The pair’s research has been published in Nature Communications this week.
New Zealand is well served by a series of monitoring instruments, operated by GNS Science, which measure earth movements and tremors.

The GeoNet system reports back data from the country’s thousands of earthquakes, and less frequent volcanic events, each year as they happen; but they are not predictive.

Dempsey and Cronin have applied past eruption data to “machine learning algorithms”, allowing them to look for patterns in the build-up to eruptions. 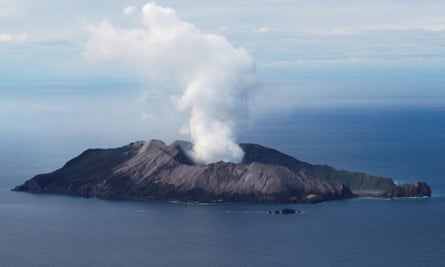 An aerial view of the Whakaari, also known as White Island volcano, in New Zealand, on 1 December, 2019. Photograph: Jorge Silva/Reuters .

“Last year’s eruption was preceded by 17 hours of seismic warning,” they write.

“This began with a strong four-hour burst of seismic activity, which we think was fresh magmatic fluid rising up to add pressure to the gas and water trapped in the rock above.

“This led to its eventual bursting, like a pressure cooker lid being blasted off.
“A similar signal was recorded 30 hours before an eruption in August 2013, and it was present (although less obvious) in two other eruptions in 2012.”

The geologists hope to adapt the data to apply to other volcanoes, such as Mt Tongariro and Mt Ruapehu, but admit it is not fool-proof.

Dempsey and Cronin said the system would only have raised an alert in four of the last five major eruptions at White Island, but “we think there is a good chance eruptions like the 2019 event or larger will be detected”.

“The trade-off is that the alerts, if acted upon, would keep the island off-limits to visitors for about one month each year,” they said.

The scientists are now working with GNS Science to make the system operational.
They have also made their data and software open source, allowing others to use the data in the hope of improving the tool.

Tourist visits to White Island, around 50km off Whakatane on New Zealand’s north-east coast, have ceased after December’s tragedy.

Among the 21 dead were 14 Australians, visitors to the island as part of a tour organised by the Ovation of the Seas cruise ship.

Their families are bringing a legal case against the cruise ship’s owners, while New Zealand police and workplace safety watchdogs are also investigating.